Kosovo has written history at the Athens Junior European Cup 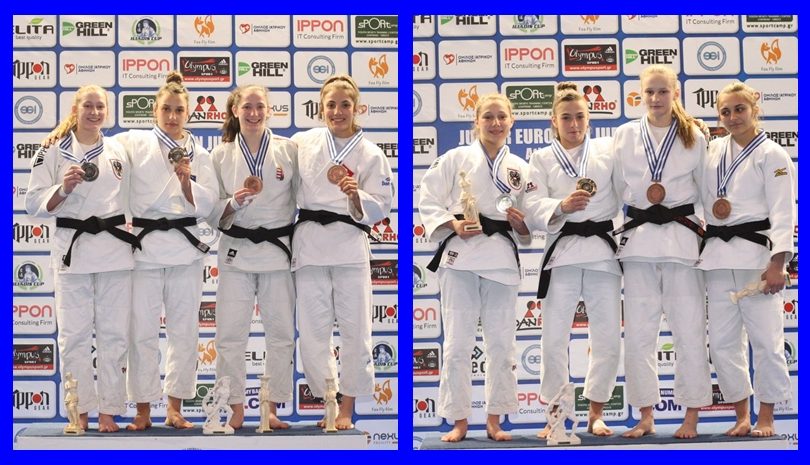 History, glorified by gold, was written by Kosovo at the Athens Junior European Cup 2019, which is hosted at the Ano Liosia Olympic Center. The European champion in 2018 in the U18 class, MUMINOVIQ Erza, was on the top of the podium in the 48 kg category, winning the first medal for Kosovo on Greek territory, while the same golden path was followed in the – 57 kg by her co-patriot LOXHA Flaka.

MUMINOVIQ Erza defeated the Austrian SPRINGER Jacqueline by Ippon in the final, while LOXHA Flaka, prevailed by Ippon against GRABNER Lisa from Austria who was 3rd in the European Cadets of 2018.

“The fact that I am the first female Kosovar medalist in Greek soil is filling me with joy and pride. I feel incredibly happy to make my coach, my family and my country proud. The moments while I was listening to the national anthem of my country in excitement were indescribable. I felt from the early morning that today was going to be my day. I knew I was strong and I able to overcome all the obstacles the opponents threw my way. My ambitions involve medals at European and world class competitions as I am still too young – just 16 years old – for the Tokyo Olympics. I was excited about the event, which from both organizational and competitive point of view is of a very high level. Furthermore, the Olympic facilities I competed on had a special aura, as I was told that fifteen years ago at the 2004 Athens Olympics Ilias Iliadis won the gold medal at a young age in this very place. I am leaving with best impressions and I wish Greece becomes a cornerstone for other athletes and coaches from Kosovo, “said MUMINOVIQ Erza immediately after the award.

First gold for Cyprus after 10 years by Asvesta

The first gold medal for Cyprus since the maiden Moudania tournament in 2009 came from ASVESTA Sofia. The 18-year-old judoka who was seventh in the same stadium two years ago, defeated the Turk CINCI Zeliha by Golden Score in the final.

“I am very happy to win my first medal in international tournaments. Two years ago I was seventh at the same stadium, but I think I have made significant progress, since I have had the opportunity to train with the Russian national team. Whenever I’m given the opportunity, I choose to go to Russia, because I know that only intense competition will provide me with the skills to fulfil my dreams. I want to thank my coaches, as well as my parents, who have aided me financially in order to make my dreams come true. I hope that this medal will be the beginning of something big in the future, both at European and world level, “said the young judoka who also has Russian ancestry by her mother.

HALAVACHOU Ruslan at -60 kg, MUZHAILA Dzmitry at -66 kg and TRUKHAN Yahor at -73 kg category achieved the perfect score for Belarus in the three men’s finals that were held today. In the final, HALAVACHOU defeated BOLATBEKOV Damir from Kazakhstan who was the gold medal winner at the Asian U18 Championships 2016, while MUZHAILA, second in the European Cadets Championships 2016, was dominant against AMANGELDI Yermek also from Kazakhstan, who was the bronze medal winner at the Asian U18 Championships in 2017. As for TRUKHAN, he beat the Moldovan PELIVAN Petru by Ippon in the final.

SZYMANSKA Angelika was the winner in the Polish “civil war”